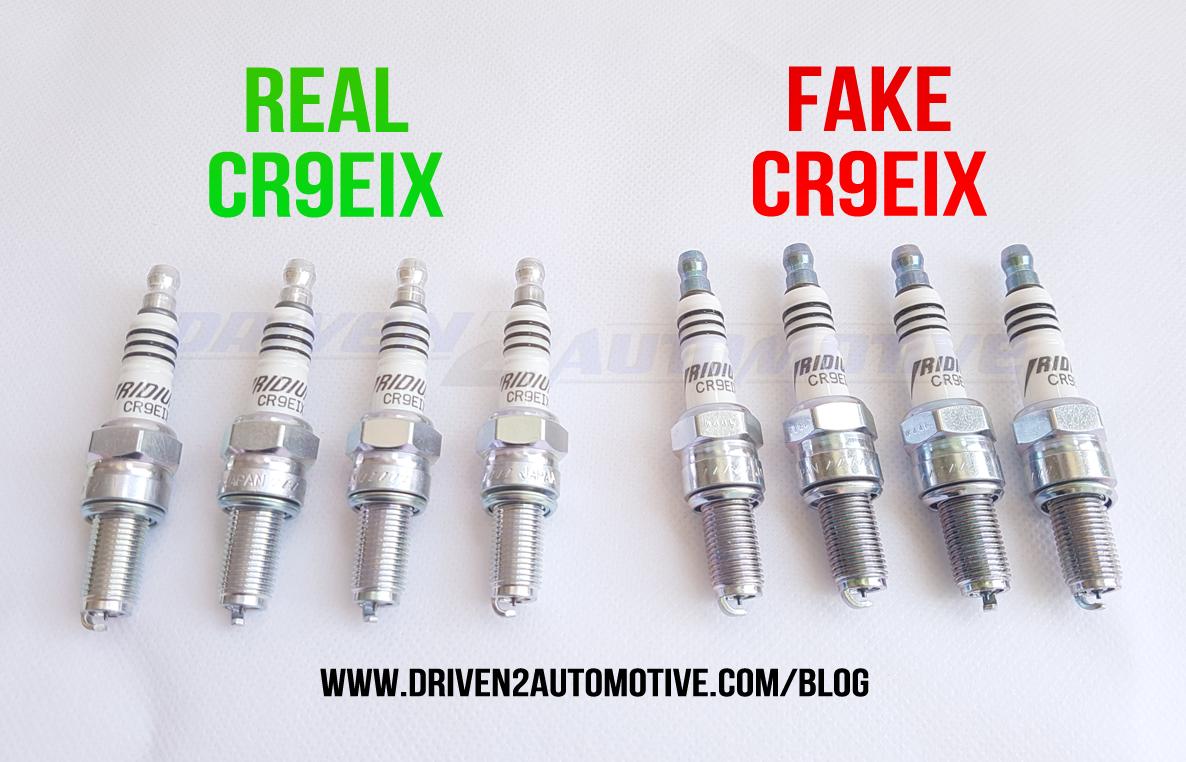 PLEASE NOTE – This article was written a few years ago so not all information provided may be accurate.

For example, on some part numbers, NGK now uses Laser Etching instead of stamping, so the font information may not be accurate.

One of NGK’s most popular motorcycle spark plugs has dismally entered the realm of counterfeiting, but we’re here to help! The fake CR9EIX plugs shown next to our genuine CR9EIX stock in this article have been sold by an unlawfully seller many hundreds of times to innocent buyers worldwide, putting a huge amount of risk to all engines and pockets involved. Not only are these fake plugs not manufactured and tested to the same degree of the genuine item, they don’t actually feature any ‘iridium’ centre electrode tip at all!

The con artists involved in the counterfeit supply chain are so irrational it’s staggering, with no care or worries in the world to anyone except their own pockets. Unfortunately for legal reasons we can’t name and shame, but we can once again provide you with photos and pin-pointers on how to spot dodgy ones. Just be aware that there may be other counterfeits around that look slightly different, but the main principles are the same.

When it came to the boxes, the first things we noticed were:

As stated above, the illustrations on the rear show installation procedures for an M14 threaded spark plug. Unfortunately for Mr Counterfeit, CR9EIX spark plugs have an M10 sized thread! This fatal error has already fulfilled our suspicions that they’re indeed fake, and we haven’t even seen the plugs yet!

This is simply one mistake NGK would never make. If you think of how many of these are sold worldwide, you can see where the problem’s heading. The number of damage reports of snapped CR9EIX plugs and damaged engine heads would soar if worldwide customers tightened down M10 spark plugs to M14 specifications. A colossal recall would then pursue as M14 plugs are actually torqued down around twice as much as M10 ones! It’s important to use a torque wrench because under-tightening can cause overheating due to poor heat dissipation and as mentioned, overtightening will cause damage. 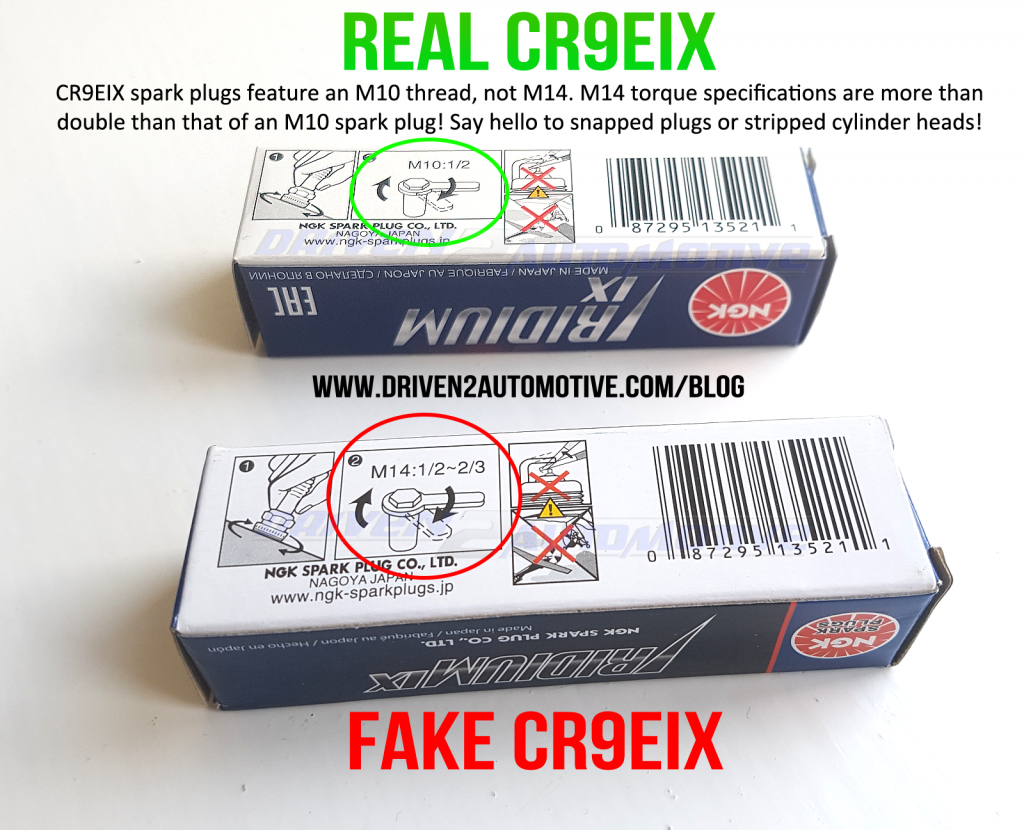 M10 (10 mm) threaded plugs with a gasket show just 10-12nm of torque are needed for aluminium heads. Now compare this to an M14 plug, where we see over double the amount: 25-30nm. Torquing down an M10 plug to 30nm will most definitely cause either distortion to the plug and eventually snap into bits, or the cylinder head thread will strip; not good.

The installation guide error on the fakes may cause even more damage if anyone also ends up using thread compound or copper slip. Using such products renders torque readings inaccurate by at least 20% so they should never be used. Modern plugs feature a special zinc coating so they simply don’t need it. NGK released a tech bulletin about this, which you can read in our other article in the link below:

Starting from the terminal cap: 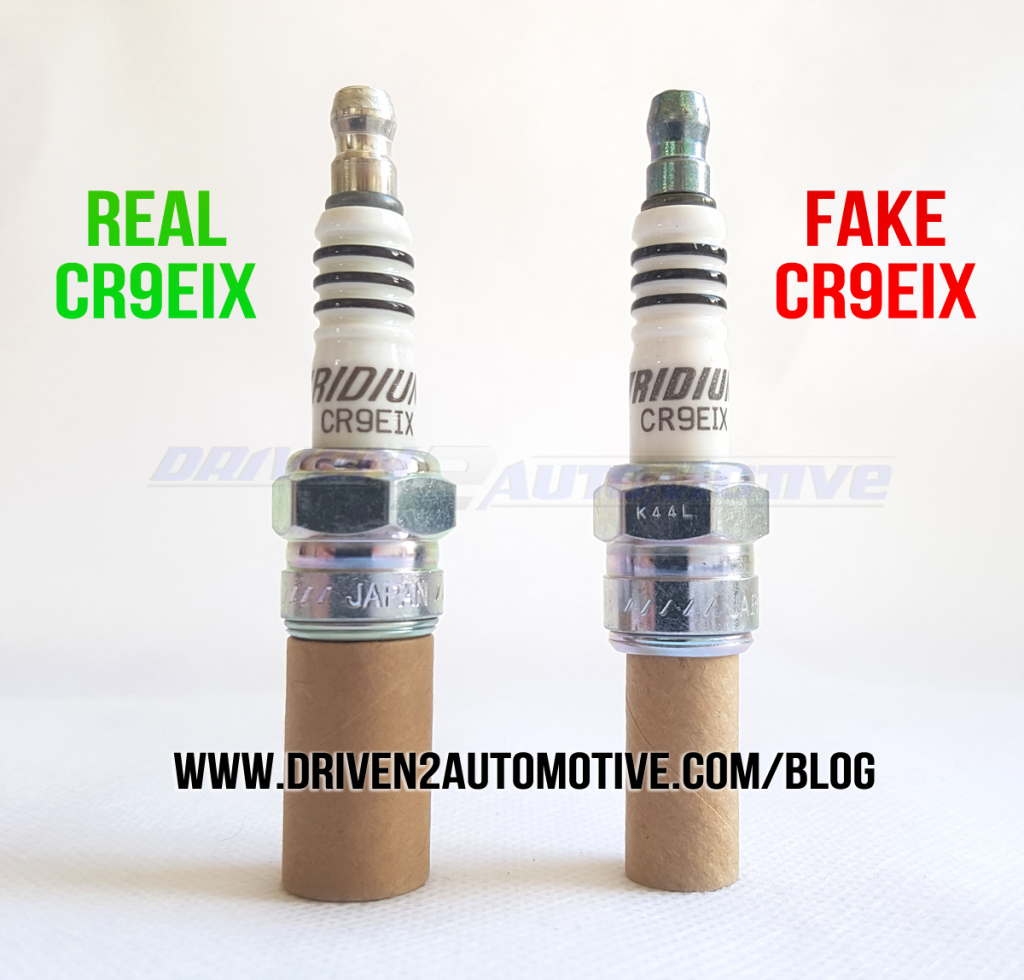 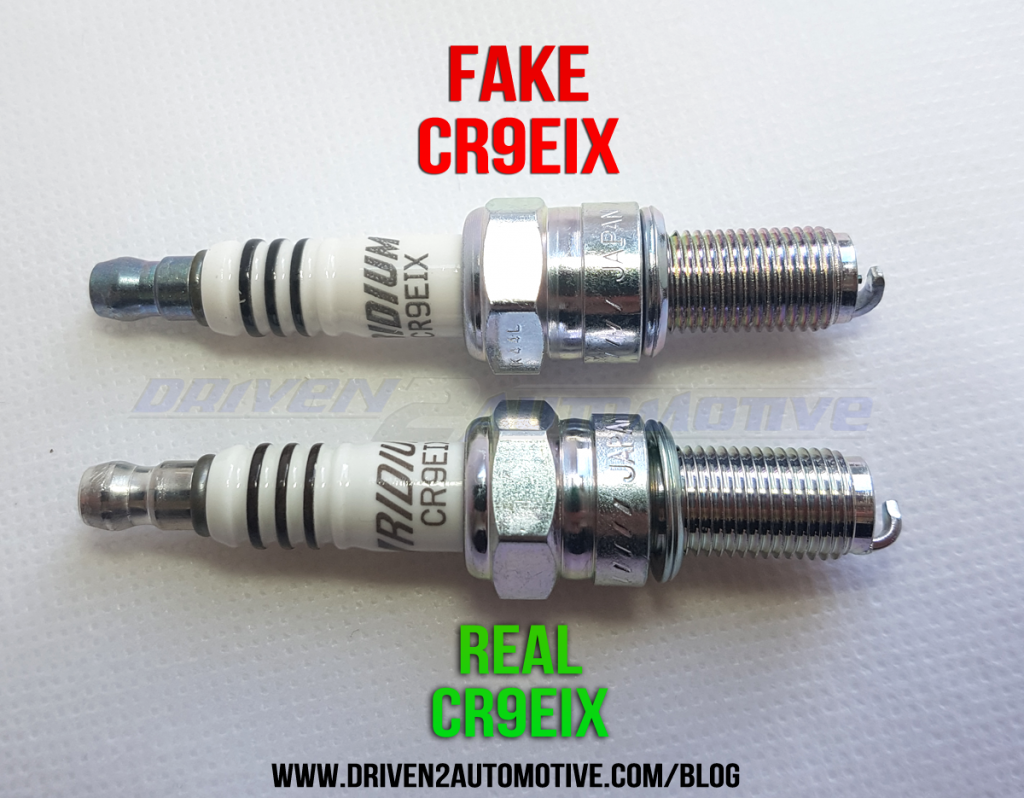 Still not convinced these are fake plugs? One of the best parts of this whole investigation is that we of course found out the fake plugs don’t feature any IRIDIUM tipped centre electrode at all, it’s all LIES. 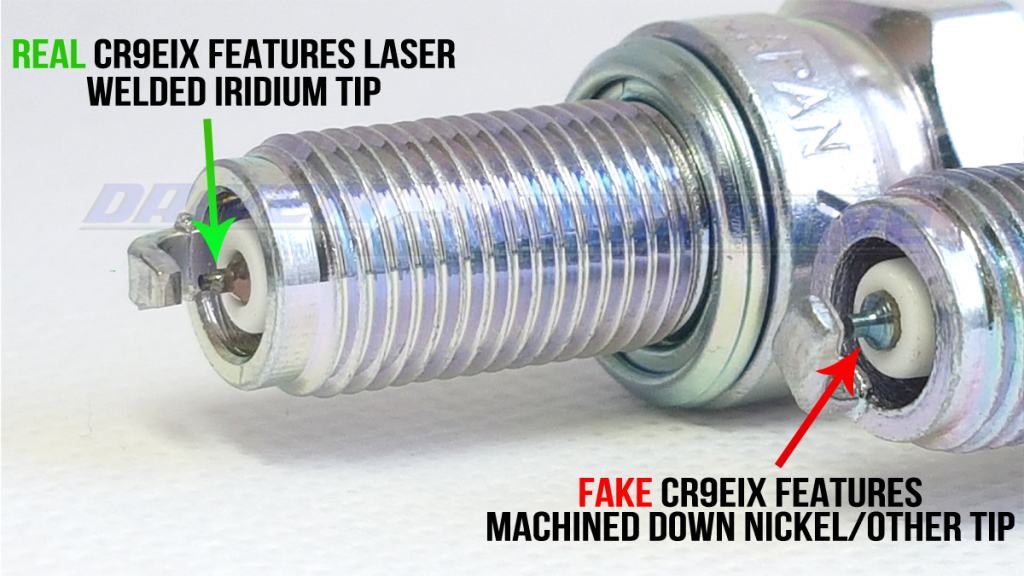 Moving to the utter bottom of the plug we see various differences: 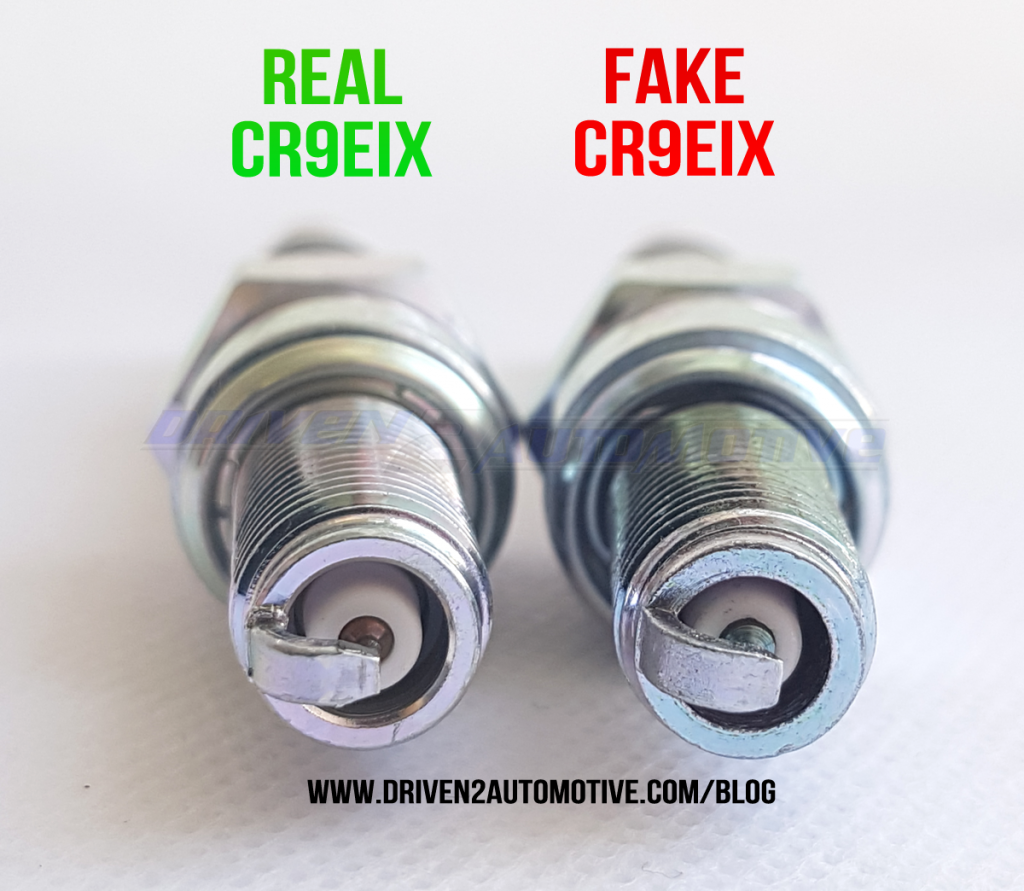 We weighed a 4x CR9EIX spark plug box as it is when shipped to a customer from our stock and it measured in at 145g. Our scales are accurate to +/- 5 grams, so to be sure the measurement was 100% correct, we weighed 5 of them from our genuine CR9EIX stock; and yep, all of which were 145 grams. You can use this weight as a guideline to measure your suspect CR9EIX plugs, the fake plugs were 155 grams in comparison. 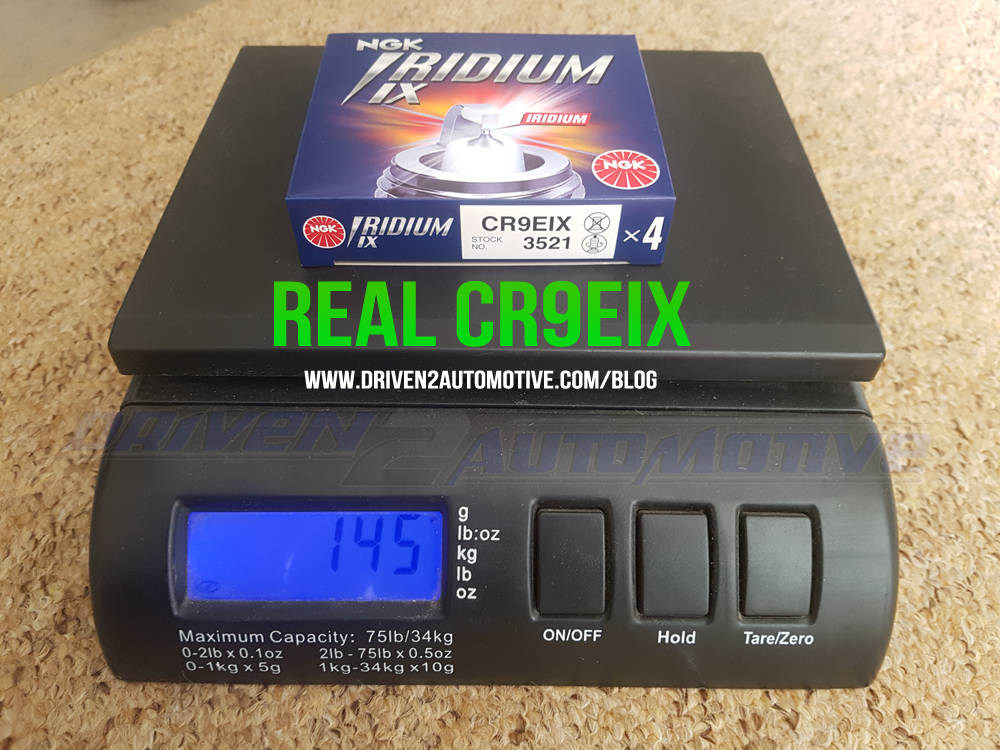 The reality is that these counterfeits are a danger to your pocket in disguise. The likelihood is that they will possibly work, however it’s a huge risk and should be remedied at once. Iridium is one of the most corrosive-resistant chemical elements on the Earth’s surface which is why they’re so popular among spark plug manufacturers. Having a centre electrode with a 0.7mm(ish) machined down nickel tip is definitely not a great idea and is likely to wear out far quicker than that of any OE standard ‘copper-nickel’ plug. So, if you’re not 100% sure they’re real, send them back!

Want to be sure you’re buying genuine CR9EIX plugs? Buy from our shop.

Pun of the Day

“It’s shocking, my friend once told me how electricity is measured, and I was like Watt!”